What’s on your Electrician’s Cart? 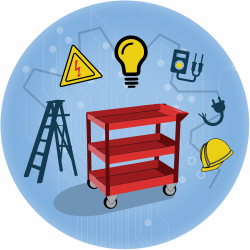 In hindsight, it sounds simple to say that customer-facing employees at Consolidated Electrical Distribution (CED) were able to substantially impact the work of their electrician customers by creating a cart. However, the process of getting there can be described as anything but simple.

As one of the largest electrical distributors in the country, CED doesn’t manufacture anything themselves, but instead carry a competitive assortment of vital parts that electricians need on a jobsite from rings, bolts, gaskets and casings to ballasts, fixtures and hangers. Any tiny piece of material necessary for an electrician to complete a job is carried by CED. Nearly all of their products are sold through a bid process and are undifferentiated. Electricians don’t tend to care much about whether a sheet metal screw came from Ford Fasteners or Mid State Bolt and Screw. They care that they need it to do a job. They need it on the job site. And they need it immediately.

Brad Selby heads a set of formerly independent distribution firms that were acquired by CED and manages them as fairly autonomous organizations. As an example of how competitive the market is, some of these firms even compete against each other occasionally.

In such a competitive market, it’s critical for a company to set itself apart. Selby’s isn’t the cheapest, and he isn’t trying to be. On any given day, a competitor can buy and sell the same materials at a lower price. Selby’s team instead competes on service. A culture of building value through what he calls “the last mile of service,” which means creating an organization that stays close to the customer, is what sets his team apart. CED doesn’t look for efficiencies by standardizing every location. Instead, they allow each acquired company to retain its culture and relationships with customers. These relationships are key, and CED believes having them is what will allow it to succeed and compete while holding on to margins.

But relationships aren’t just jargon to describe the connections and friendships salespeople at CED have with their electrical contractor customers. Relationships mean understanding how those contractors work, which job sites they will be on at any given time, which products will be installed, what equipment will be used and what type of challenges will be faced in that location. Relationships mean knowing what that electrician will need before they need it. This understanding of relationship wasn’t exactly planned. It was the result of having to innovate value in a competitive space.

On a multimillion-dollar construction project, downtime costs money. A delay in one activity can result in a cascading effect of lost time as subcontractors move on to other jobs. When an electrician has to stop work because they are in need of a part, they call their distributor. Responsive distributors who provide good service immediately send out a truck with the part on it after receiving the call. Loading the truck up and sending it out into Chicago traffic usually results in a 90-minute delay, during which time the electrician and his crew normally decide to grab a cup of coffee. At $300 an hour in the competitive Chicago construction market, it’s very expensive coffee.

A CED salesperson started thinking about this downtime and ways to help electricians avoid it. Tagging and scanning items in the warehouse in order to load them onto the truck as quickly as possible had been a long-standing protocol, and the company had created an online catalog so that electricians could find what they needed to order more quickly. However, electricians on a job site don’t always have part numbers with them, and identifying a part from a picture in an online catalog is not a perfect science. This issue didn’t pose a big problem for nuts and bolts, but other parts from some companies didn’t play well with others.

The salesperson realized CED wasn’t just selling electrical parts; their value was also tied to delivery. Sometimes the company could work fast and make quick deliveries, but he knew they needed a way to do it consistently. Promising service and then not delivering on it every time was a threat to his credibility with customers—the kiss of death in a relationship business. He knew the only way to truly provide good service was to prevent the need for it in the first place. This meant they had to have every part available to the electrician before the electrician even realized he needed it.

This simple idea meant several things for the sales process such as spending more time understanding what the electrician’s day-to-day looked like – not just a typicalelectrician’s day, but instead a specific electrician’s day. Obtaining this information meant asking questions a salesperson wouldn’t usually ask and gathering enough information to know that the electrician was moving to a different job site at 11:00 AM. By knowing the customer’s business as well as they did, CED could anticipate what would be needed for an entire project on any given day.

Thus, “The Electrician’s Cart” was born. Understanding the electrician’s business at a task level allowed CED to create a package of every possible item the electrician might need on the site. The cart was delivered to the jobsite by 4:00 AM every day, and the electrician was billed only for what they used off of the cart. This new technique eliminated delivery waits, except on rare occasions. As the company rolled out the cart idea (pardon the pun), they quickly became electricians’ provider of choice.

Of course, competitors tried to mimic the example. After all, the concept is quite simple. But CED used its size and logistics to better execute the initiative. Salespeople at CED were required to work in the warehouse and carry out deliveries for months before they were allowed to sell. They acquired a deep understanding of what was available to go on the carts, but more importantly, they gained knowledge of the delivery process, what expectations electricians would have and what questions they should be asking. It was easy for competitors to load a cart with miscellaneous items, but CED’s cart had the right items. It was easy for a competitor to get a cart to a jobsite, but hard to get it there by 4:00 AM.

According to Selby, the power of the cart created by one of his salespeople wasn’t actually the cart itself. The power was that CED had redefined the purpose of a relationship. These relationships weren’t what sold the product; they were what allowed the company to discover what each individual electrician needed and valued. Selby knew that from a management perspective, success in a competitive, undifferentiated environment meant value had to be determined in the last mile; it wasn’t something that could be identified in a marketing meeting and rolled out to all locations. Selby believes the role of management isn’t to tell people what to do, but to ask questions, listen for ideas and remove barriers so that salespeople can innovate value.

I encourage you to stop and think—what’s on your electrician’s cart?

Learn more from Dr. Scott Downey at the Purdue Food and Agribusiness Executive Summit October 1-3, 2019. This Summit will provide senior level leaders the opportunity to network with peers and engage in a series of case studies, company discussions and special topics based on disruption happening across the food and agribusiness industry. Prepare yourself for the conversations to come in your board room by applying to take part in the 2019 Summit.

If the Summit isn’t for you, be sure to catch Dr. Downey in one of our other upcoming professional development workshops. Click here for more information and find a program right for you.

What’s on your Electrician’s Cart?

In hindsight, it sounds simple to say that customer-facing employees at Consolidated Electrical Distribution (CED) were able to impact the work of their customers by providing them with a cart. However, the process of getting there was anything but simple.
Download This Resource

This article examines the act of collecting, organizing and storing selected data and information that has been identified as needed. The objective is to create a process that allows for timely availability of the most relevant data for transformation into intelligence.

Data-Driven Decision Making in Times of Crisis: What Data?

In our previous article (Data Driven Decision Making in Times of Crisis), we discussed the importance of making decisions based on insights derived from data and information. In other words, the article focused on having an intelligence-driven approach to the decision making process. Decision makers need the right information at the right time in the most useful and trustworthy form to be able to make well-informed decisions in an uncertain environment. A key question arising from our intelligence framework is: What data/information is important? Or, more precisely, what data/information is necessary to inform our decision?

COVID-19 has sent shock waves throughout the world, challenging every aspect of life. During this time of great tragedy and uncertainty, peoples’ daily lives have been disrupted in an abundance of ways. The concepts of communication, distance, work, food and even shopping are suddenly being redefined. In the food and agricultural business world, this tragedy has resulted in the examination of many aspects of business from the design of supply chains to impacts on consumer buying behaviors to the future of international trade. Has this massive disruption brought a new awareness to risk preparedness, co-dependencies in supply chains and the risks of the pursuit of efficiency at all costs? What are the ramifications of forced use of technology to communicate, buy and arrange for deliveries on the selling and buying functions of farms and agribusinesses? Have we shifted to a longer-term view where things like climate change and sustainability are embraced as part of the grand challenges of the industry, or have these issues been placed on a back burner as we focus on the here and now? Have we started to think about and implement new performance metrics that measure the industry and firm survivability, not just profitability? Ultimately, in the aftermath of this global tragedy, what can we learn about the future of the food and agribusiness industry that can help us create more resilient markets, supply chains, firms, leaders and employees?