Squirrels are Both Rational and Consistent; Humans are Human 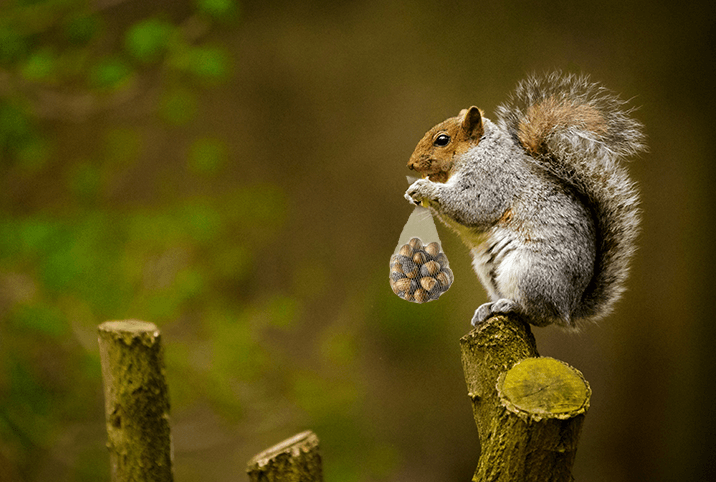 It’s interesting that we use the term “squirrelly” to describe humans when they are acting unpredictably. As it turns out, humans are much more squirrelly than squirrels themselves when it comes to consumer preferences and decision making.

When I first arrived at Purdue University as an assistant professor, I was fortunate to be invited to work with Dr. Robert Swihart, professor (and, at the time, the department head) of Forestry and Natural Resources. During that time, I had the opportunity to work with Dr. Swihart’s then PhD student (now postdoc at Stanford University) Dr. Mekala Sundaram. It was through this collaboration that I came to appreciate the decision making savvy of squirrels. Actually, ‘appreciate’ is putting it too gently … it would be more accurate to say I became infatuated with the decision making of squirrels. They are rational. They are consistent. They do the right thing at the right time with nearly no mistakes. But humans, well, they do not behave this way; humans are human.

The above described collaboration resulted in one of my favorite papers I’ve ever been involved with. This collaboration was challenging (scary) from a very basic standpoint; I came to this project to advise modelling of consumer choice using a discrete choice experiment (DCE) framework. This DCE framework is something I know very well and have done now literally hundreds of times, but the squirrels were different. They didn’t behave like any group of consumers I had ever worked with. They were remarkably consistent — to the degree that I couldn’t measure any variation in tastes/preferences, which was sort of ‘my thing’ and the way that I was supposed to be bringing value to this team.

Unlike squirrels, human consumers have notable variation in their tastes and preferences, plus individuals are fickle and inconsistent, even internally. Case in point: chocolate is my favorite, but today I want vanilla. Chocolate is still my favorite, just not right now. Well, let me see both options side by side … hmmm, I still don’t know which one I want. My favorite is available — it’s right there. And like I mentioned … it is my favorite, but what is that new, unknown flavor right there? Should I try that instead?

Working with these squirrels is the single time that I have ever failed to measure heterogeneity in consumer tastes/preferences. They did, at times, select different things, but they were the correct things for that squirrel in that time and place, and they didn’t vary across squirrels. Squirrels are unbelievably consistent ‘shoppers’ for food; in fact, they shop properly for eating versus storing (caching) and for the time of year.

In addition to being reliably correct at nearly all times, it should be noted that the squirrels to which Dr. Sundaram presented choice sets (literally two nuts set upon two little golf tees like a miniture squirrel buffet) were forced to make choices without all of the nicities that humans rely upon. Humans are presented with nutrition labels, far too many details about flavors and product features and pictures on the packaging to eliminate the need to read all of that packagaing, if desired. Yet, humans still exhibit enough heterogeneity of preferences across people and within a single person’s choices for entire careers to be built upon attempting to understand. Squirrels on the other hand evaluate the nutrition of nuts while simultaniously maintaining an awareness of their environment so as not to become a snack for a hawk in the process. They then select (nearly perfectly) the nut with the ideal nutritional features and storage potential for the day.

“In contrast to rodents, consumer economic discrete choice models evaluating the utility of a product with respect to product traits typically find heterogeneity in responses of human consumers (Ortega et al. 2011). Human heterogeneity is attributed to differences in taste of consumers (Olynk & Ortega 2013) and probably reflects the low fitness consequences of decisions typically studied in consumer economics. When it occurs, heterogeneity in responses of free-ranging animals is sometimes attributed to differences in experience or age and differences in effort expended by individuals (Mauck et al. 2012). Homogenous responses such as those we observed are likely a result of natural selection.”

Human consumers may be the focus of many studies, but nature’s woodland resident consumers should be appreciated as the wildly consistent little model shoppers they are. I thought I could help a research team learn about how to apply tenants of human shopping behaviors to squirrels. Instead, the squirrels taught me a few things to use in my own understanding of humans. Lesson learned.