We at Purdue University are proud to have partnered with Indiana Grown to receive a grant through the USDA’s Federal State Marketing Improvement Program to study the economic impacts of the program for agricultural producers and agricultural supply chains in Indiana. Here at Consumer Corner, our team’s component of this project was to develop a broad understanding of how Indiana residents perceive Indiana agricultural products, what they seek out in their own shopping trips and ultimately to understand consumer demand for Indiana Grown products. In ConsumerCorner.2021.Letter.19, Taylor Thompson (MS student in Purdue Agricultural Economics) kicked us off with the top items Indiana residents seek out locally. Today, Benjamin Ellman (BA student in Economics at Vanderbilt University; Summer research intern in Purdue Agricultural Economics) is helping us see the challenges with buying local foods.
~ Dr. Nicole Widmar

What’s Stopping You From Buying Local?

I was born in Chicago, IL and raised in the nearby suburb of Evanston. I am currently an undergraduate student (Class of 2022) at Vanderbilt University in Nashville, TN, pursuing a major in economics and minors in sociology and business. My exposure to agribusiness has been limited in my formal schooling, despite its pertinence in the rapidly evolving global economy. As a result, I wanted to see how my perspective as a researcher could lend to answering questions surrounding the economics of agriculture. I am excited to be interning as a research assistant under Dr. Nicole Olynk Widmar and contributing to the growing body of important agricultural economic research. If you would like to speak more, feel free to reach me by email at benjamin.g.ellman@vanderbilt.edu or on Twitter @EllmanBen.

In the midst of an ongoing health crisis that has stressed agricultural supply chains and processing facilities and launched consumers into panic, questions have been raised regarding the increased interest in local production and processing. Respondents in our recent survey sample were asked to agree with or disagree with a series of statements regarding their food purchasing to yield insight into the preferences of Indiana residents for locally produced products. The sample, totaling 484 completed responses, was collected in April 2021; respondents were targeted to be representative of the Indiana population in terms of age, sex, income and geographic region.

Differentiating between local and non-local items seems to be of at least some importance to Indiana residents. Respondents more often indicated a preference for products local to Indiana, as well as suggesting they cared about knowing where their food was produced more often than not. Seemingly contradictory to these findings, respondents generally did not know where the majority of their purchased food originated. If locally produced food is important to Indiana residents, what prevents them from taking a more active role in buying local products? Well, for a representative sample of Indiana residents, it was most commonly seasonality, price and limited selection.

In an effort to investigate potential barriers to purchasing local products, we asked, “Which of the following possible factors limit your purchases of locally produced food?” Respondents were asked to select whether the provided factors were “very limiting”, “moderately limiting” or “not limiting”. 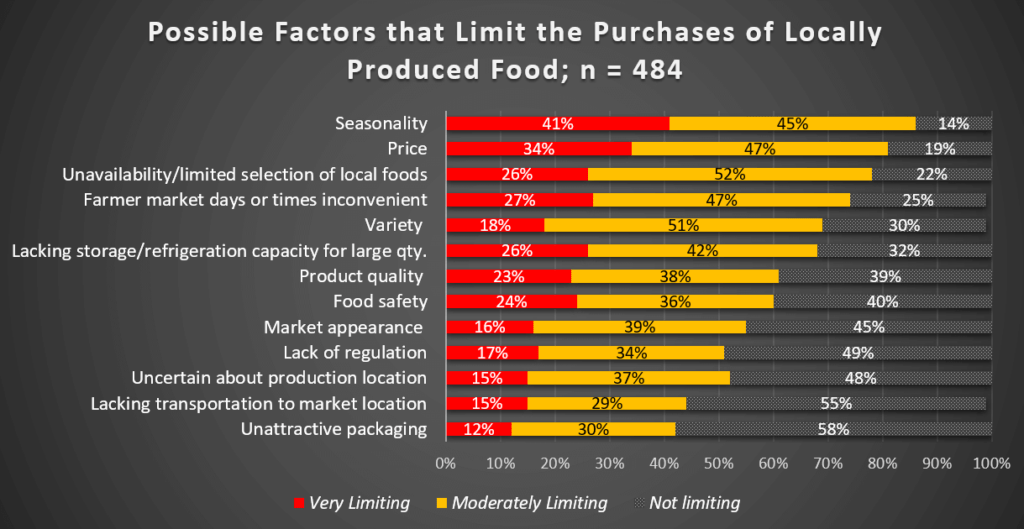 * The graphic is ordered for visual ease. The limiting factors were randomly ordered for each individual survey respondent (and thus were not presented to respondents in the order depicted above).

The results from this preliminary analysis suggest that the largest factor inhibiting the purchase of products locally made in Indiana for Indiana residents is the seasonality of local products, with 41% of respondents selecting it as “very limiting” and only 14% as “not limiting”. The unavailability or limited selection of local products was also selected as highly limiting, with only 22% of respondents claiming it was “not limiting”, suggesting that a consistent selection of local products may increase consumer interest in purchasing local food. Given the location of the state and associated weather/climate, the limitations on what can be grown and when are known, and the resulting market implications expected.

Unsurprisingly, price was selected as the most limiting factor behind seasonality; respondents indicated it was “very limiting” 34% of the time and “not limiting” only 19% of the time, highlighting price as a key contributor in consumers’ food choices. As an attribute universally shared by all market items regardless of type and whether or not we purchase them, the prominence of price in consumer decision making is expected.

Considering the infrequency of available farmers markets alongside their seasonal limitations, it is imperative to consider the relationship between factors such as inconvenient scheduling, seasonality, unavailability/limited selection of local foods and variety. Each suggest a possible lack of consistency that consumers may expect in their food purchases, leading consumers to shy away from more frequently seeking out locally produced foods, despite a (preliminary) stated preference for them. Yet, on the other hand, the seasonality and variation in what is available may be part of the appeal for others who seek to feel connected to what is growing around them. The reasons for purchasing local are varied and many, and the pandemic disruptions in supply chains have pushed even more attention onto locally grown and processed products. However, there are limitations and challenges, only some of which we’ve explored here in this preliminary analysis.