Answering the call for online media analytics applied directly to agribusinesses, this analysis seeks to quantify the online media sentiment for five prominent agricultural corporations, all selected to have significant crop-related businesses. Agribusinesses included in this analysis and used to draw inferences such as how imminently online sentiment reflects actual incidents occurring in the industry were: Bayer Crop Science (referred to as Bayer), DuPont, Land O’Lakes, Monsanto and Syngenta. Although these businesses produce multiple products, this work focuses on the seed production components of the businesses.

The Netbase platform was used in this analysis, following methodology presented previously here on Consumer Corner. The geography for searches was limited to the United States and posts in English were studied exclusively. Researchers identified search terms or keywords, as well as exclusionary terms to eliminate invalid references to develop a dataset encompassing media posts associated with the top five agricultural seed agribusinesses in the United States. Search terms were focused first on gathering data related to agriculture, broadly defined, thus including terms such as ranch, farm, agriculture, #ag, checkoff and crop science, just to highlight a few. A total of 48 primary search terms were included to begin data collection.

Exclusionary terms are necessary to ensure that data collected is relevant to the subject matter sought. For example, FarmVille, a popular online game, while perhaps relevant to video gaming or other potential measures of sentiment surrounding virtual farms, is not relevant to studying agribusiness industries in U.S. agriculture. Thus, FarmVille and all related references, in addition to State Farm insurance, bot farms, ranch style homes and ranch dressing were removed from the data search parameters. A similar process was used to identify domains involving commentary that did not apply to the scope of this research. A total of 69 terms and 32 domains were identified and excluded by researchers in conducting searches as outlined.

Then, within the general search for agricultural businesses and the agricultural industry, broadly defined, five searches were conducted targeting top seed-related agribusinesses specifically to allow comparisons and studying of potential contrasts. Drawing from a list of top agricultural companies in the world as provided by Castro (2015), the top five global seed companies (Monsanto, DuPont, Syngenta, Land O’Lakes and Bayer) were selected to study in-depth in this analysis. Along with Limagrain and KWS, these companies comprise the top seven seed providers, accounting for nearly 90% of the total global sales volume in the industry in 2017 (Zhang, 2018). Among them, the top two seed companies, Monsanto for 35% and DuPont for 26%, account for 61% of the worldwide proprietary seed market (Zhang, 2018). Given the explicit focus on seed businesses, search terms were developed to encompass key products and services in seed sales/services for each company, employing their own product and promotional materials to generate the terms.

The time period studied (12-1-2015 to 2-15-2018) offers sufficient time for seasonality/annual factors to be experienced more than once and occurs during a particularly important period of activity for the structure of agribusinesses in the U.S. For example, the period chosen covers announcements of three merger cases across the seed companies studied, 1) Dow Chemical and DuPont in 2015, 2) ChemChina and Syngenta in 2016, and 3) Bayer and Monsanto in 2016.

Data was collected and downloaded on March 4, 2018 with the exception of the monthly timeline data (i.e. sentiment broken down by month rather than the total time period), which was downloaded on March 14, 2018. Given the fluidity of online and web-based datasets, the efficient collection of data is imperative; the social media datasets were all collected within a 10-day period in March 2018.

Each business studied had different levels of involvement on social media during the study period. Monsanto did not have any accounts for the conglomerate itself, although most of its subsidiary seed companies and brands did have social medial accounts. In contrast, the other four companies were engaged in social media strategies both at the conglomerate and subsidiary levels, although they are not overly active in posting. Absence of active posting on social media by B2B-focused corporations does not prevent related conversations from developing.

As mentioned, the time period of this study covers several significant events that occurred in the agricultural industry, including mergers and major press events. There were three mergers announced in 2015 and 2016. Dow Chemical and DuPont proposed to merge in December 2015 (MacDonald, 2019b). Two months later in February 2016, China National Chemical Corporation (also known as ChemChina) proposed to purchase Syngenta, a Switzerland agricultural chemical and seed firm, at $43 billion (MacDonald, 2019b). Finally, in September 2016, Bayer confirmed $66 billion to acquire Monsanto after it placed the first offer of $62 billion earlier in May of the same year (MacDonald, 2019b; Gara, 2016; de la Merced and Bray, 2016; BBCWorld, 2016).

Significant numbers of mentions were collected each month of the study period, with some notable movements in volume of mentions (Figure 1). 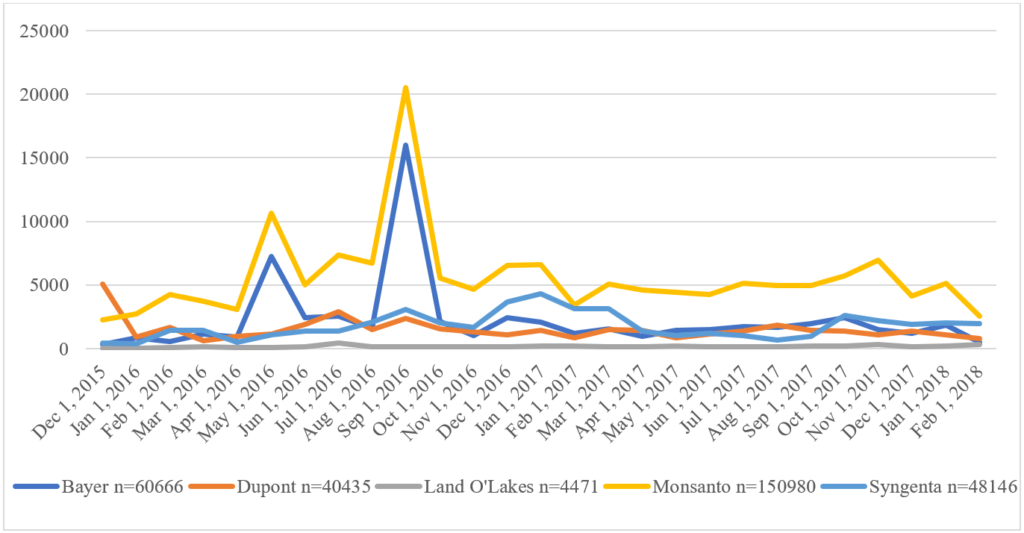 Table 1 presents sources for individual company searches. News was the most frequent source with Twitter as the runner-up across all firms but Syngenta. Twitter was the top source for Syngenta with a small margin over News. 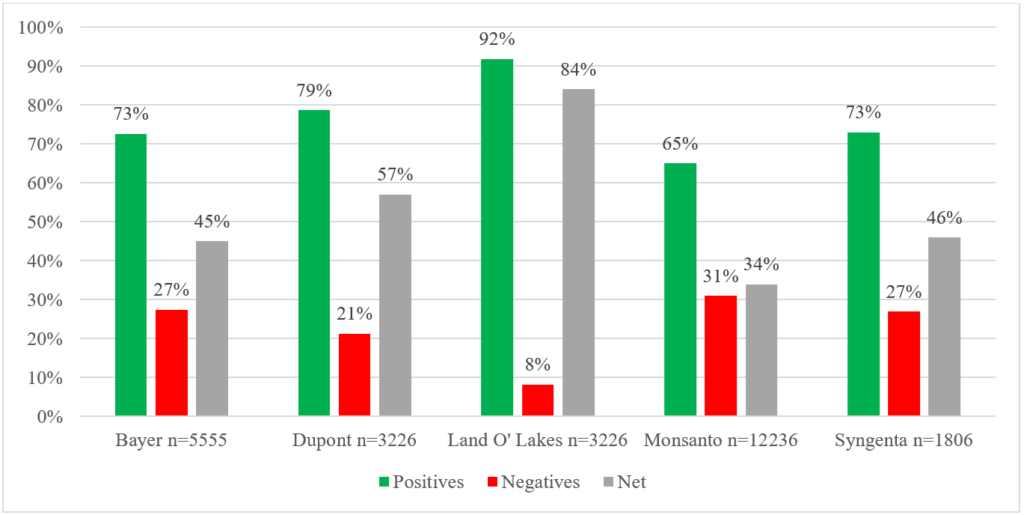 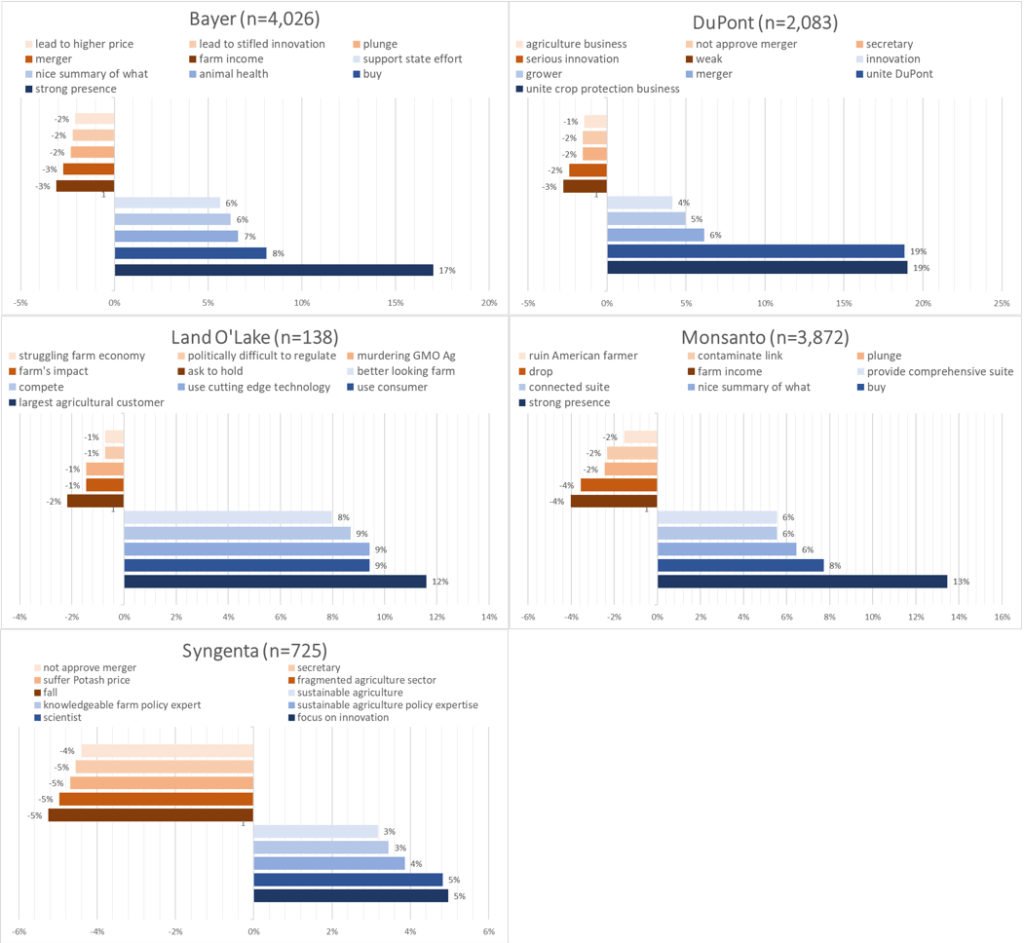 Monthly net sentiment changed significantly over time (Figure 4). Dow and DuPont proposed its merger in December of 2015, and Bayer made its first offer of purchasing Monsanto for $62 billion in May of 2016; the purchase was confirmed for $66 billion in September of the same year. The proposed mergers are reflected in increased volume of chatter for the companies involved and substantial drops in net sentiment. However, the Dow-DuPont merger did not capture social media attention when approved in September 2017. In contrast, the proposition of ChemChina to acquire Syngenta in February 2015 did not appear strongly; however, the merger was highlighted in social media in January through March 2017, approaching its approval in April 2017. Thus, timing of volume of attention and the associated movement in net sentiment was not obvious or consistent in terms of whether attention would be garnered upon initial announcement or eventual approval. 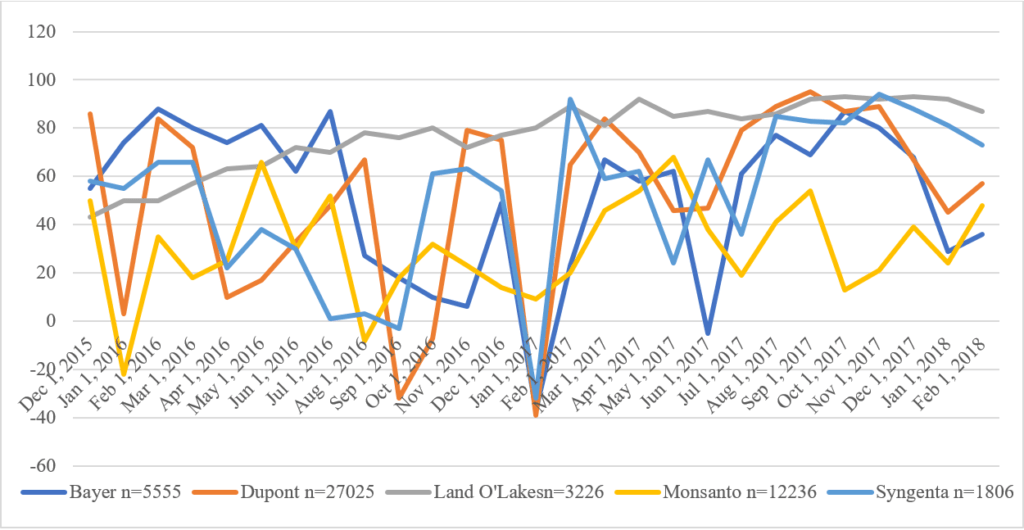 Net sentiment weakened after the announcements of the mergers — either proposals or approvals — due in part to negative sentiment from posters worried about anti-competition. For example, net sentiment for DuPont dropped after the announcement in December 2015, but still remained positive. Bayer and Monsanto also showed decreased net sentiment after Bayer proposed the acquisition of Monsanto in September 2016 while remaining positive. Net sentiments for these two mergers were not affected at the time of approvals as seriously as they were at the moment of the propositions. Contrarily, net sentiment for Syngenta fell both after the merger was proposed in February 2016 and approved in May 2017, although net sentiment remained positive. Given that mergers and acquisitions have both pros and cons associated, this neutralization of the net sentiment around mergers suggests that social media reflects diverse views of various (opposing) parties.

Sometimes It’s Outside of Your Control, but It Is Still About You … and It Still Impacts You

Election Day 2016 was not Disney World’s doing, but mentions of Florida in conjunction with the election and whether or not Florida deserved Mickey Mouse still impacted the overall sentiment towards Disney World because of it. Similarly, agribusinesses are not immune to media about them or adjacent to them impacting their image either.

On December 31, 2016, the New York Times published an article discussing deprivation of autonomy of universities and regulators upon signing confidentiality agreements with corporations. The focus of the article was mostly on Syngenta and a disclosure of interviews with former Syngenta-affiliated scientists to show how much agrochemical companies press scientists to deliver outcomes favorable to companies. The article barely mentioned other big agrochemical companies such as Bayer, DuPont and Monsanto when it was explaining confidentiality agreements. But online media immediately reacted to this article with a New Year’s Eve release date during the holiday season when many were away from their offices.

Monitoring social media and reacting to negative spikes even during the holiday season may be pertinent for professional brand managers and communications professionals. Although the volume of chatter did not rise much, net sentiment fell sharply to a score of -40. Given how net sentiment is calculated, the other potential aspect influencing this time period is the relative lack of brand management from the corporations themselves, which would typically be positive postings taking place during business days. Note that unlike the other four firms mentioned in the article, Land O’Lakes was not mentioned at all in the New York Times article and shows no downward change in net sentiment.