In 2020, we talked about how you were a hypocrite. Well, that’s still the case (sorry to be the one to tell you). Then in 2021, we talked about your YouTube-worthy temper tantrums and why they need to stop (spoiler: embarrassing yourself) and finished with some tough-love recognition of the fact that you (probably, well…almost certainly) deserved that natural consequence that the universe so kindly provided. Now, welcome to 2022, you liar, you!

With the 2021 winter holidays still fresh in our memories and New Year’s resolutions *potentially* still being adhered to (considering it’s only been three days since you made them), it’s time to consider whether or not you’re also a liar. Now, in fairness, “liar” is a rather strong term … your lying may not be on purpose or with intent, and it may not even be that you’re lying to other people. Giving the benefit of the doubt, you may simply be unintentionally lying to yourself.

Forgive the jest and admittedly loose interpretation of our own research being cited here; we’re really talking about biases in self-reported data more so than lying, per say. But hopefully you can appreciate the spirit of the conversation, even if liberty is being taken (and you are grossly insulted at this point).

We seek to understand human behavior here on Consumer Corner. There are a variety of concerns in survey data, including a whole assortment of biases, and one bias we’ve studied extensively is social desirability bias (SDB). Most of us in the United States admit — or more positively stated, report — that we make New Year’s resolutions. In fact, we’ve found 60-63% of us report a New Year’s resolution to lose weight. With all of the healthy holiday chatter about working out, losing weight and starting the new year off right, one must wonder how accurate the data surrounding these good intentions really is. We wondered the same and delved into how social desirability bias might impact self-reported data on these and related holiday behaviors.

Social desirability bias occurs due to a subconscious effort to make yourself look better where you respond to a question in a way that deviates from the truth with a more “socially correct” answer. Consider being asked if you eat healthy, for example. You want to answer yes because you want the person asking you to think highly of you, and “yes” is the socially ‘better’ answer, regardless of how you actually eat or if you even try to eat healthily. Bottom line is that there is a propensity for respondents to under-report bad behaviors and over-report good behaviors.

Over-reporting good behavior for oneself relative to their own reported answers about the average person has been found in a series of our studies — and cemented in this article — to be unbelievably consistent. Those interested can delve into Table 5. Comparison of percentage of respondents with SDB scores between current sample and previous publications, box indicates direction of SDB. The share of respondents exhibiting social desirability bias is incredibly consistent and is presented for our control sample in the shaded boxes with the percentage who exhibit the bias being summed in bold. For example, for the statement, “I anticipate gaining weight during the holiday season”, the percentage who exhibit SDB can be calculated by adding 10 + 10 + 15 + 20 = 55 and is given to the right of the box. 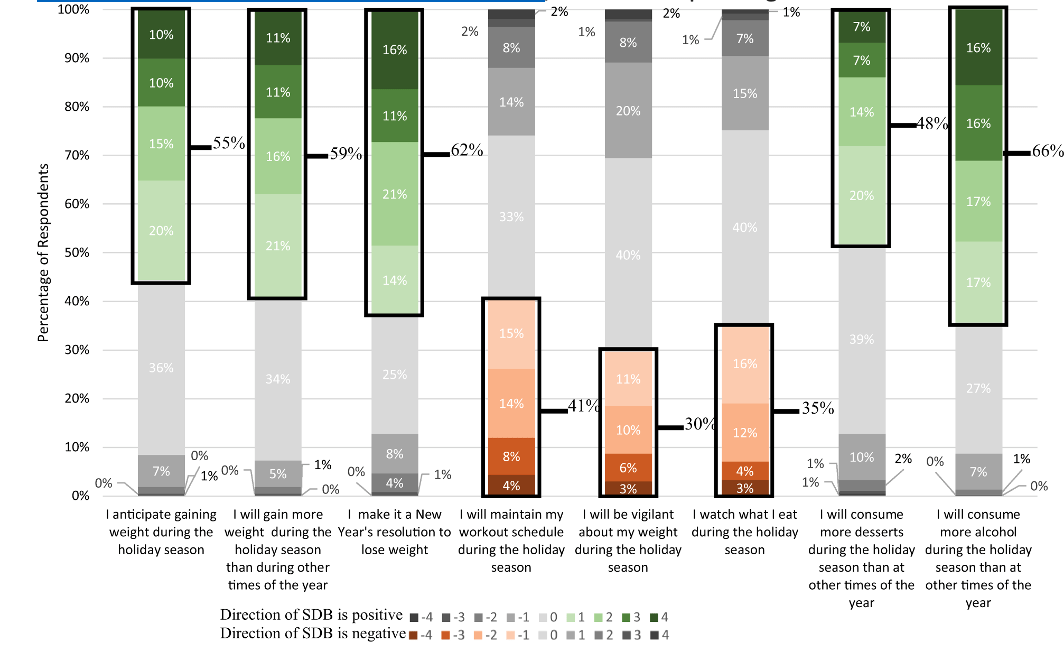 We used cheap talk to discern if informing people about this propensity for over- and under-reporting according to social pressure could help. The cheap talk statement provided to half of the randomly assigned respondents developed for this study was, “Human inclination may be to answer questions in a way that deviates from your true behavior in an effort to improve the impression you make on others. This desire to give what is believed to be the socially “correct” or acceptable answer is often referred to as social desirability bias. Please keep this inclination in mind and try to reflect on your true behavior when answering questions”. 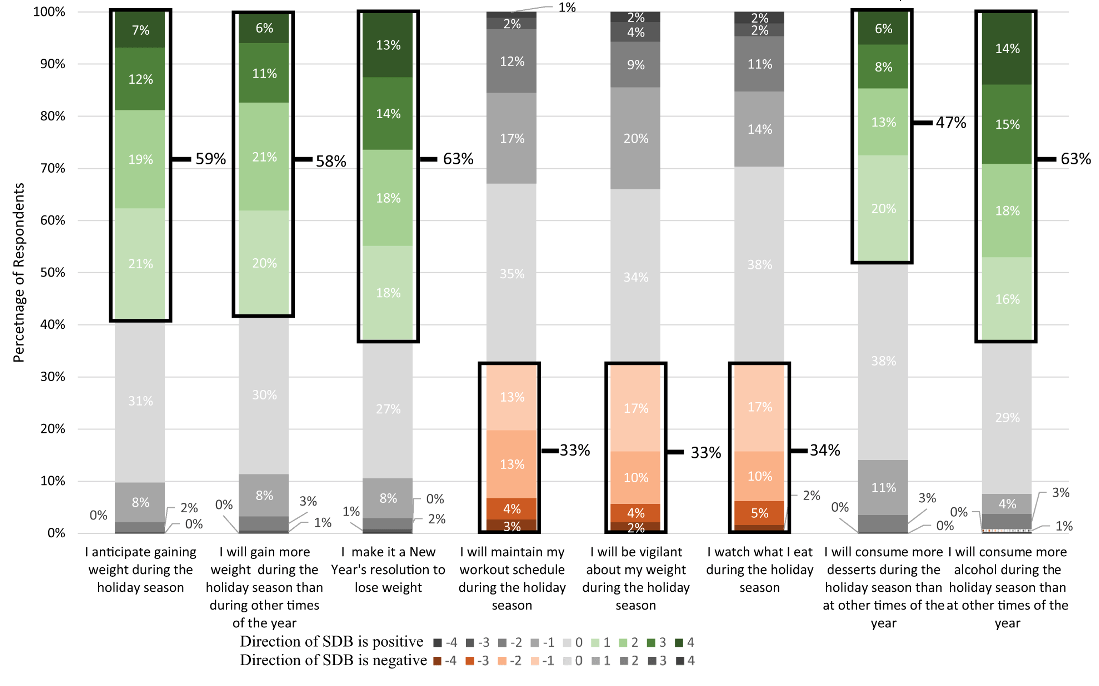 Taken all together, the incidence of social desirability bias is reasonably high, but not necessarily unexpected given the subject matter surrounding weight, holiday eating and drinking, and resolution setting. More surprising is the consistency in the proportion of respondents who rate themselves as better than their own rating of the average person around them, which was deemed as evidence of social desirability bias in this work. Admittedly, it is possible for an individual to do more than the average person in good behaviors and less than the average person in bad behaviors, but it is not possible for all of us to be better than average in both directions, especially considering we ourselves are in the population to whom we are assigning averages and that the same person is rating themselves and the other people in society.

Given how much health and medical decision making is reliant on self-reported data, the ability to get that data as accurate as possible is important and necessary. When it comes to self-reporting health behaviors, at least around the holidays, it appears the vast majority of us are better than average, which seems problematic data-wise if one stops to ponder.