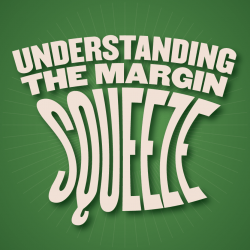 Projected profit margins in agriculture are much tighter than they have been in some time. Michael Boehlje, David Widmar and I recently published a paper that describes the margin squeeze facing agriculture and some strategies that farmers can use to manage in this environment. In this post, we use the front end of that paper to offer some perspective on the margin squeeze and why we feel it may take some time to resolve. Those interested in reading the full paper and strategies that farmers can use to manage through this downturn can find a copy here.

Current University budgets show the extent of the potential margin squeeze facing row-crop farmers. Purdue’s budgets project losses on average quality farmland from $114 to $277 per acre. Likewise, Illinois budgets project operator and land returns ranging from $200 to less than $100 per acre, values likely less than cash rental rates. Nebraska budgets project costs in the range of $4.70 per bushel for corn, well above current commodity prices. In short, the declines in crop prices have not been accompanied by cost reductions, setting up a potential margin squeeze.

In the paper, we illustrate the extent of the margin squeeze with Figure 1, which shows the projected profit and loss for operating high quality Indiana farmland calculated in the winter before planting for each year since 1991. We note:

“The expected level of losses for 2015 are unprecedented over the period 1991-2015. It is not uncommon that farmers face a potential loss prior to planting. In fact, of the 25 years shown, 15 showed potential economic losses prior to planting. However, none of the budgeted losses were of the magnitude currently expected. Of course, much can happen after the release of the budget. Yields can be better or worse, output prices can be higher or lower than expected, or costs could even fall. However, the magnitude of this potential loss is sobering. So why has this situation arisen?” 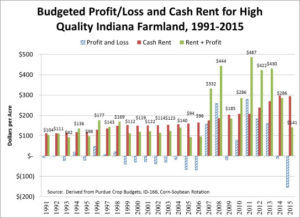 One of the key factors that makes agriculture susceptible to margin squeezes is the prevalence of fixed costs in the overall cost structure. As we point out in the article, less than half of a farmer’s typical expenses are made for variable inputs, such as seed, fertilizer, chemicals, etc. The other big component of costs are fixed costs such as land rents, equipment ownership costs and family labor. These costs are typically slow to adjust to changing output price conditions.

We argue the following:

“In order to understand why margin squeezes can last for an extended period of time, it is important to think about the input markets that give rise to the variable and fixed costs. Prices in markets for variable inputs such as fertilizers, seed and crop protection chemicals tend to adjust more rapidly than prices for fixed assets. This is because there is considerable competition in these markets and the product life cycles match the production cycle. However, these markets only account for a portion of a farmer’s total costs.

Fixed asset markets such as the land market tend to adjust more slowly. Rents are frequently not negotiated every year, only a small portion of land sells in any year, and equipment has a multi-year life cycle. As a result, the fixed costs tend to adjust more slowly. Since they comprise a large part of total costs, farmer’s margins tend to get squeezed until fixed costs adjust downward.

The downward adjustment in fixed costs is typically painful. It is difficult for farmers to let high-priced leases go. In some cases, they are contractually bound to higher lease payments, for at least a year or two, than can be justified. It is difficult to see land values fall, particularly if they are a key source of borrowing capacity and wealth accumulation in a farming operation. Equipment values also tend to resist downward adjustment as farmers avoid sales and ride out the squeeze with the equipment that they have.

Eventually, fixed costs adjust downward and margins return to a more stable level. However, for farmers with high levels of debt service during the adjustment process, the squeeze can make debt repayment difficult at best. These high fixed costs also mean that farmers are slow to reduce production as prices above variable costs contribute to servicing the fixed costs. This keeps downward pressure on output prices and upward pressure on variable costs of production.”

The above argument basically makes the case that it takes time for fixed costs to adjust to changing economic conditions. Eventually, the adjustment will take place. This happens as we get to the economist’s proverbial happy place, the “long run,” where a more sustainable profit situation is obtained through adjustments in all markets, including fixed and variable input markets and output markets. As we note in the paper:

“In the long run, it is likely that a stabilized level of profitability will result through one or some combination of these three scenarios: 1) variable costs moderate through eventual reduction in farmer demand for inputs, 2) fixed costs decline through reductions in fixed asset demand and values, and/or 3) output prices may improve. While it is nice to think about a long-run equilibrium, it is very important that farmers and everyone in the agricultural value chain prepare for what is likely to be an uncomfortable process of getting to the long run.”

Currently, it appears that we are in the process of seeing some of changes described in the previous paragraph. One way farmers can reduce some of their expenditures is to shift the crop mix to less input-intensive crops, and some early forecasts of plantings have suggested a switch of corn for soybeans. On the fixed asset side, it appears that farmland prices have stopped rising and are falling in some areas. We have also seen output prices rise above the levels of early September. The extent to which these changes alleviate margin pressures will be determined in the coming months. Until then, it would make sense to plan cautiously. You can find some of the strategies that we suggest for farmers and agribusinesses in the full paper.

Creating Social Impact with an Eye Towards Profitability

One thing that has always been clear to those in agribusiness is how closely our communities and businesses are united. While other industries are beginning to realize that managing the ecosystem’s health is the right thing to do to sustain long-term business, farmers and food production organizations inherently understand this.

As marketing managers know, creating an integrated and cohesive marketing strategy has many moving parts. They must continually examine where they are and where they need to be, while trying to efficiently and effectively allocate limited resources across multiple functions related to the marketing plan.

The Customer Journey: Where are You Going Wrong?

Depending on the product and targeted customer segment, Ahir Gopaldas and Anton Siebert suggest customer journeys shouldn’t always be effortless and predictable in their recently published Harvard Business Review article.