We first dove in-depth on Consumer Corner into online and social media analytics when we covered an analysis and resulting publication that looked at online media mentions and net sentiment alongside more ‘traditional performance metrics’ like stock prices for Disney. We have since looked at online media analytics for a very diverse set of topics, including: Halloween, Thanksgiving, eggs, how the general public perceives animal agriculture at fairs, mosquitoes and attention to the public health threat of ZIKV, and agribusinesses (specifically Bayer, DuPont, Land O’Lakes, Monsanto and Syngenta).

Ultimately, our interest in online media data is in the realm of ‘public data for the public good’, which led us to studying foodborne illness outbreaks using online media data. Agricultural economists have long studied market and public reactions to food recall announcements, generally finding very small effects of recalls on consumer demand. We recently published our article in the Journal of Food Protection, revealing that topical mentions in online and social media searches moved closer in step with foodborne illness outbreak reports from the Centers for Disease Control (CDC) than with recall announcements by the U.S. Food and Drug Administration (FDA) and the Food Safety Inspection Service (FSIS). 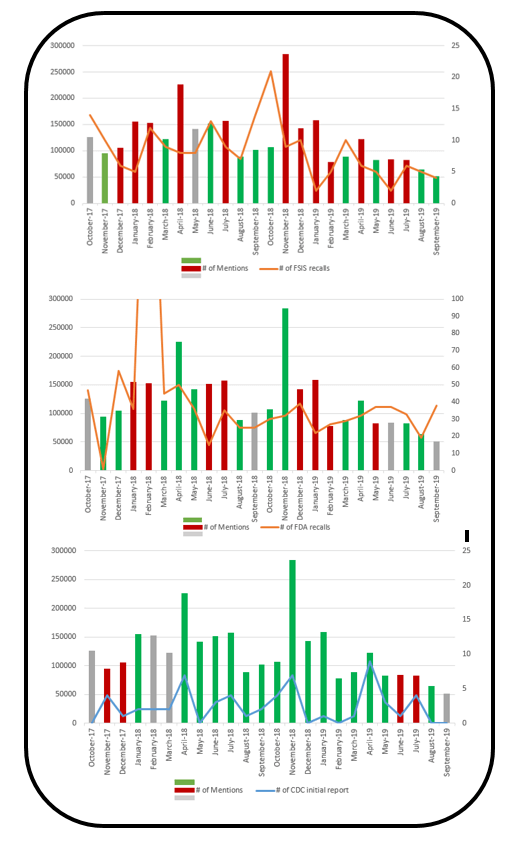 We found that, “This relative popularity reflects people more often sharing or posting about illness risk regardless of whether a recall occurs, suggesting that recall announcements by the FDA and FSIS may not induce changes in consumers’ behavior, whereas initial illness reports by the CDC may.”

In addition, there is a lag in time between the CDC illness reports and its actual recall announcements by FDA or FSIS due to several steps of foodborne outbreak investigation. Admittedly, the CDC illness reports alert people of a ‘real and present threat’ to be responded to, while the primary role of a recall is to remove potentially unsafe items from the marketplace (store shelves) after investigation. Publicly available and publicly-generated at least in the case of social media data, may offer policy makers insight into effective food risk communication for modern times in which much of our communication and sharing of information is incredibly rapid and almost always online.

The article on which this Consumer Corner letter (ConsumerCorner.2021.Letter.28) is based is cited appropriately as: