Managing in a New Era

For many years, we have talked about how sales and marketing have evolved over time. If we look at this historically, we can consider how the sales and marketing process focused on explaining product features because of the number of innovations in manufacturing in the early 1900’s. Sales activities were not distinct from marketing. Sales was about promoting a product, similar to what we think of today as advertising. Management styles at this time were focused on humans as machines. Managers were “bosses” who reported to other bosses and sales was a repetitive behavior of informing customers and potential customers about product capabilities and taking orders. 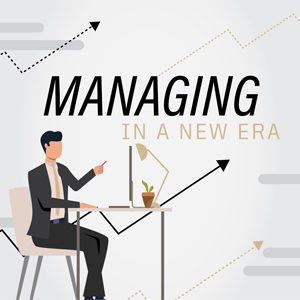 Continuing with this historical perspective, the expanded manufacturing for WWII meant that a glut of similar products began to appear in the marketplace. Manufacturers did not have the time or resources to develop new product innovations quickly. They converted the manufacturing of guns, rations, uniforms and equipment into manufacturing the necessities of the time: vacuums, canned food, clothes and other goods. Similar products in the marketplace meant companies had to sharpen their ability to promote their products. This period saw the dawn of the advertising age, along with an explosion of selling activity needed to move those goods, which we call the “Sales Era.” With more sophisticated communication techniques like local radio and television, sales became a persuasive activity.

Management began to take the measurement and process perspectives of the industrial era and incorporate them into the command and control operations familiar from successful war ventures. For the first time, sales was a skill that could be taught. Sales managers taught salespeople about “beating the pavement” and “not taking no for an answer”. They were also taught that if a customer did not have a need, it was the salesperson’s job to “create” one. Salespeople were the hunters and customers were the prey. Sales became manipulative, and as soon as customers had an opportunity to buy without being sold something, they took it. By the end of the sales era, the title of “salesman” (nearly always male) was so tarnished that salespeople began being called representatives, field marketers, customer service technicians…anything but salespeople.

As online purchasing took hold in the late 1990’s and early 2000’s, companies like Amazon began training consumers to realize that they could purchase nearly anything without ever leaving their recliner. This perspective transferred into the business world, too, as the sales process moved into the “Market Era”, or the “Customer Era.” Sales processes in agribusiness and other industries remained relevant, but the role shifted to understanding what buyers wanted and providing them with that value. In this, we saw the rise of “solutions” selling. Salespeople were taught that every product had features, advantages and benefits, but the focus needed to be more on the benefits rather than features. Salespeople memorized these benefits and spouted them as appropriate to customers based on their understanding of customer “pain points”. During this time, management-by-walking-around became the rage. Total Quality Management (TQM) was the predecessor of approaches like LEAN and Six Sigma. These approaches asked managers to look for exceptions to “best practices” and coached salespeople on how to improve their skills.

Up until the last year, I was often asked what would follow the market era. Because of the market era’s focus on customer needs, I could not fathom that there would be something that would displace it, but today…we know. It is no longer enough to respond to a customer’s needs; salespeople have to anticipate them. We are living in the “Predictive Era”, and this anticipation is not a guess, but instead based on a social and business relationship that has developed. Prediction requires salespeople to know the customer’s strategy, track customer behavior and understand how they respond to market dynamics, volatility and risk. Prediction also means knowing how the customer chooses between competing goals and interests.

In the predictive era, knowing the customer wants to make money isn’t deep enough knowledge. The need to anticipate customer problems and solutions in this new era has shifted the job of sales managers from a focus on coaching to a focus on truly managing. They must analyze sales and market data — not only the transaction data, but sales activity that leads to transactions —and identify how to allocate resources and determine if a good salesperson in a difficult territory is better than a bad salesperson in an easy territory. Managers in the predictive era have to develop salespeople, not based on the manager’s own previous success as a salesperson, but based on the maximum potential of a salesperson based on their possessed talents.

Here’s the thing, though…while we present these eras as historic, they’re not. We have products, companies and even industries that still operate in the product era, focused on telling people about products. There are a lot of individual salespeople and sales organizations that are built on the “get after it” sales approach, and there are many companies with great solutions who are still working on developing best practices. But as with all eras, sales organizations not in sync with the times often get displaced by those whose customers see them as more relevant.

It’s a whole new ballgame today…a whole new era. What comes next? I have no idea. It is likely that most of us will see the current era for the rest of our lives, or who knows, maybe there will be fundamental and systemic changes that move us forward more quickly. For now though, we’d better make sure we have all of the tools we need.

Learn more from Dr. Scott Downey at the Sales Management and Leadership professional development program on May 27-28, 2020. Attendees will assess their people development skills and gain tools for becoming a more effective coach for their team. Participants will also learn five keys to leading effective developmental conversations, practice handling situations such as retaining good salespeople, and learn to use assets they already possess to their greatest potential. Register now!

I’ve written before about how I believe one of the more significant challenges in any business is finding the best way to get sales teams and marketing managers on the same page. Although this may seem like a simple task, it’s never as easy as it sounds. The fact of the matter is, when you look at the basic purposes of sales and marketing teams, it comes down to this: marketing is responsible for developing strategy, while salespeople are responsible for implementing strategy. Without proper lines of communication, understanding and buy-in, strategy — as good as the intention may be — can fall flat due to improper implementation.

The food production and distribution industry is increasingly at the forefront of public discussion and debate. Is organic food a fade or growth market? Will “industrial farming” continue to dominate food production? What are the future prospects of “local” food? What role will automation and robotics play in future food production, processing and distribution? How will climate change shape the future of the food and agribusiness industries? What is the future of biotech and GMOs in the industry? These are simply a few of the questions Rob Paarlberg discusses and attempts to answer in his engaging book, Resetting the Table: Straight Talk About the Food We Grow and Eat.

Farmers markets are a popular way to support local agriculture and expand direct-to-consumer sales. For consumers, they provide an avenue for them to purchase goods not often sold in grocery stores; however, the COVID-19 pandemic heavily impacted farmers markets around the country. As they return, some cities have implemented social distancing and capacity restrictions. Therefore, it is imperative that farmers markets and vendors work together strategically to provide the best experience for consumers.