Don’t Be a Turkey 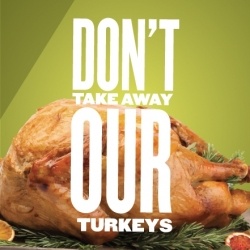 Back when I worked in banking, there were a lot of mergers. One year, in September, our bank was bought by another, larger organization.

Everything was fine until Thanksgiving. In our original company, on the Friday before Thanksgiving, the company would bring each employee a big, frozen turkey.

The bank, realizing that they had just messed things up, arranged for a local grocery store to honor a coupon for $15 off a turkey. They distributed the coupons on Monday.

That made things even worse. Employees said, “Not only do they not care, but they are so crass as to think all we’re worth is a coupon!”

This was company culture at work. The original bank had a culture of caring about employees that was expressed through the turkeys. Company culture can often be found as artifacts: values (like caring about customers and employees), assumptions, narratives, heroes, symbols (like dress code, logos and mottos) and rituals (like promotions, celebrations, company picnics, or in this case, Thanksgiving turkeys).

Those turkeys showed that the company cared. Without knowing it, the new bank had eliminated a ritual of employee appreciation, confirming (unfounded) fears that the new bank’s culture was heartless and uncaring.

Every company has a culture, a remnant of all the relationships and actions of a team or organization. Culture shows up in the unwritten rules that guide behavior when the boss isn’t around. Because it’s so powerful, managers or leaders may want to direct it. But writing it down or communicating it directly makes it “policy,” not culture. So how can you influence it?

When you try to change culture, you first have to know what your existing culture is. Culture is evident from the ways people act. For example, does an employee have authority to “make things right” by a customer? Can they do it to a certain dollar limit? Do they have to check with someone first? It’s hard to write a policy that says, “Do what makes sense.” Culture can be a more powerful guide than policy. Asking your team what they think or how they would handle a situation can tell you a lot about the culture.

After observing your culture, you can decide what you’d like the new culture to be. Once you decide on the new culture that you want, you can’t just write it down in a memo and pass it out to your employees. (“The culture has changed! Here’s what it is!”) In order to change culture, you have to think about human behavior and think carefully about how to migrate to the new culture.

In the 1940s, Kurt Lewin suggested three stages for creating intentional change: unfreeze, change and refreeze. You “unfreeze,” to let employees know that things are not always the same, you change things, and then you refreeze with the new culture.

Sometimes, you need to create intentional disruption in order to change your culture. That lets employees know that it’s not the way it used to be. In the turkey example, the disruption wasn’t intentional. The new company could have managed the process better by letting employees know that there weren’t going to be turkeys delivered on the Friday before Thanksgiving.

Following this example, the company might have explained that they show appreciation at their summer awards picnic. Or they might have pointed out that their culture rewards cost savings rather than expressing employee appreciation with turkeys.

Refreezing the culture requires creating new artifacts. So, what new traditions would reflect the desired culture? Could you celebrate a hero who saved the company a lot of money? Look for opportunities—patterns of the new culture—and really bring those to light, while recognizing that the old patterns are still important. Maybe an intentional effort by senior leaders to visit each member of the team and express gratitude personally would be a way to show that the company can appreciate employees without spending money. The leaders’ behavior influences culture far more than words.

Ultimately, culture is determined by the team, not the leader, but leaders can influence culture through their actions – no turkeys needed.

Leadership is a Journey, Not an Event

We’ve been through a lot this past year and a half. Across the board, we’ve experienced disruption like none of us have ever experienced before. During this time, we’ve certainly made mistakes, stumbled our way through the constant changes and challenges, but most importantly…we’ve prevailed.

What We Want in Our Leaders

The volume of information defining leadership — specifically, effective leadership — is remarkable. Organizations such as Harvard Business Review, The Center for Creative Leadership, Korn Ferry, Gallup and even Google have provided insightful research on what it takes to be an effective leader. This research has proven extremely valuable and served as the cornerstone for many leadership development initiatives.

As we begin planning for our 2021 Sales Management and Leadership program, I thought it might be worthwhile to share a checklist of some best practices for sales managers.